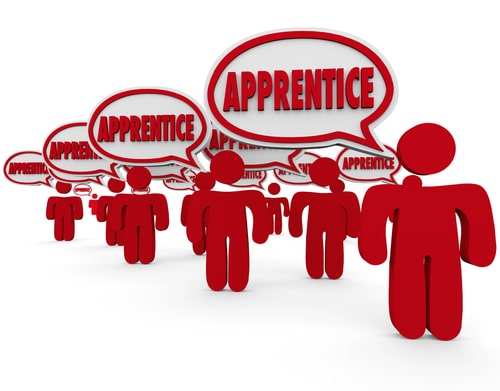 With businesses complaining of talent shortages in certain sectors, apprenticeships could be a great way of training new employees to fill these gaps. However, there are numerous misconceptions which have led to a stereotype regarding the opportunities apprenticeships can offer. This week we discuss the potential benefits of offering apprenticeship schemes as well as dispelling some of the myths and asking how much more businesses can do to change the opinions of the masses.

What are the Myths?
Primarily, there are several issues that are currently stopping many from approaching internship or apprenticeship schemes. These issues can be financial as well as ideological, as people often believe that apprenticeships do not offer adequate opportunities for career growth. Some of the myths surrounding this debate include:
• Financial: The average weekly wage of an apprentice is £170 a week, which is a great deal more than many people believe. Research from Monster.co.uk reveals that 95% of people believe that the wage is significantly lower than this, with 60% thinking it can go below £100. Unsurprisingly, it is the belief that they will not get paid enough that stops 59% of people beginning an apprenticeship.
• Career: From the same research, 21% of respondents said they did not know enough about the concept of apprenticeship schemes, and stated they did not believe they would receive the same career opportunities as those who are trained elsewhere.
• Age: Age seems to the be the biggest variable in terms of apprenticeships with a surprising 89% of 40-60 year olds thinking that apprenticeships are only aimed at 17-21 year olds. This is echoed in further statistics which state that 36% of 16-24 year olds would consider an apprenticeship as opposed to 14% of 40-60 year olds.

In spite of these misconceptions, the statistics found through the research by Monster.co.uk, just under half of older respondents would consider starting an apprenticeship program should they believe a new career will follow from it.

The Rise in Apprenticeships
There has been a significant rise in the number of businesses who are offering apprenticeships, whether for young or older workers. Barclays Bank have recently started offering banking apprenticeships to people over 50 years of age as a way of retraining workers who may have found themselves either unemployed after the recession or passionate about finding a new career. The over-50s demographic is the fastest growing section of society and they are unfortunately the demographic who risk long-term unemployment as opposed to younger generations who have decades to find the right job. Statistics from the Department of Business, Innovation and Skills state that 50,000 over 50s became apprentices last year, demonstrating a keenness and willingness to stay working, as many wish to retire later than in previous decades. Now that companies are beginning to wake up to the realisation that the over 50s market is an untapped generation of both talent and life experience, we may see a massive increase in the number of older people looking to retrain and keep working.

Young people are also turning to apprenticeships in order to get the knowledge and training they need without spending the thousands of pounds needed for a university degree. Previously, university degrees were the main way to get noticed by employers, however the weight given to what is learned at university has shifted. Many believe that university leavers approach work with knowledge however lack the soft skills needed to succeed in the workplace. These can be skills such as communication, customer service and working under pressure.

Benefit for Business and Apprentice
There are incentives for businesses to begin offering apprenticeships; the government started a huge campaign last year to encourage both employers and workers to learn new skills through a “learn while you earn” program. The scheme offers companies up to £3000 per employee that signs up, ensuring they do not lose out financially through the time taken to train new members of staff.

Apprentices are attracted to the idea of being paid while they learn, and the wage is a great deal more than many people believe. Young people need to be well-versed on what it takes to survive and thrive in a workplace and apprenticeships are an excellent way to gain knowledge of the hard skills as well as the soft skills which are needed – indeed recent figures suggest that soft skills, like flexibility and communication, are worth up to £88billion to the economy.

For older workers who may have been in the same position for many years, apprenticeships are the best way to learn how working environments have changed, often with the chance to learn new technologies and working styles that can reignite the passion for working and learning.

And of course it goes without saying, if you’re a business looking to recruit an apprentice online – you’re in the right place!