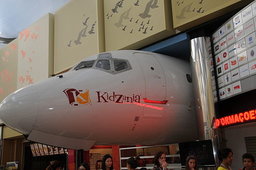 A new kids’ entertainment venue situated in Westfield shopping centre aims to teach children the value of earning a living, giving them the opportunity to try their hand at a range of industries. We look at the Kidzania franchise and how it could help UK children understand the value of money and teamwork.

Situated over two floors in Shepherd’s Bush shopping centre Westfield, Kidzania is a huge educational entertainment venue aimed at teaching children of all ages how the world of employment and salaries really works. With a range of ‘businesses’ incorporated, children can be firemen, shop owners, surgeons, police officers and more, earning an imagined wage dependent on their job.

The mini city has its own currency called kidZos which can be earned and spent at a range of places within Kidzania. Upon entry, children are given 50 kidZos which they can spend as they like, however when they run out it is time to get to work. There are no banks or lending streams in the world of Kidzania (perhaps the one aspect of real life not to be included in the experience) so when a child runs out of money, they must choose a place to work in order to earn more. The jobs are paid according to their difficulty, for instance a surgeon receives Z12 whereas a model gets Z9, adding a sense of realism to the entertainment by giving children aspirational opportunities.

Kidzania London will be the 19th franchise worldwide, signalling that the experience is a success universally. The creators have gone to great lengths to create real-world authenticity whilst still offering kids a fun and safe place to play. There are elements of the park which cleverly incite a passion for education and work into the minds of the kids, for example, those who choose to study at Kidzania University can earn up to 25% more at work.

However, the park is not without its controversy with some reports suggesting it is unnecessarily making children worry too soon about the problems surrounding employment, salaries and the world of work in general. Some news outlets have slammed the experience as turning children into the consumers of the future and turning what should be a fun role-play into something more serious. In spite of any negative publicity, Kidzania has become a huge franchise, suggesting that children who want to ‘play grown-ups’ can do so whilst being educated in a small way as to how the world works.

Can It Help Younger Generations?

Whilst the negative comments are not without weight – there has been huge media attention on the subject of children growing up too fast – there are some helpful traits that Kidzania could help children nurture later in life. We have previously written about the lack of soft skills being demonstrated by school and university leavers, with many being unable to integrate into the world of work. This is not because of a lack of education in terms of the industry, but a lack of the important aspects of communication, teamwork and work culture that make an employee hireable. The Kidzania park could potentially instill work-related values into the mind of the younger generation even earlier than at school, thereby making soft skills easier to access when they are needed later in life.

It remains to be seen how successful Kidzania will be in London, and whether UK kids will have the same enjoyment as others across the world, but it is an interesting experiment that we are sure will gain momentum over the coming months.