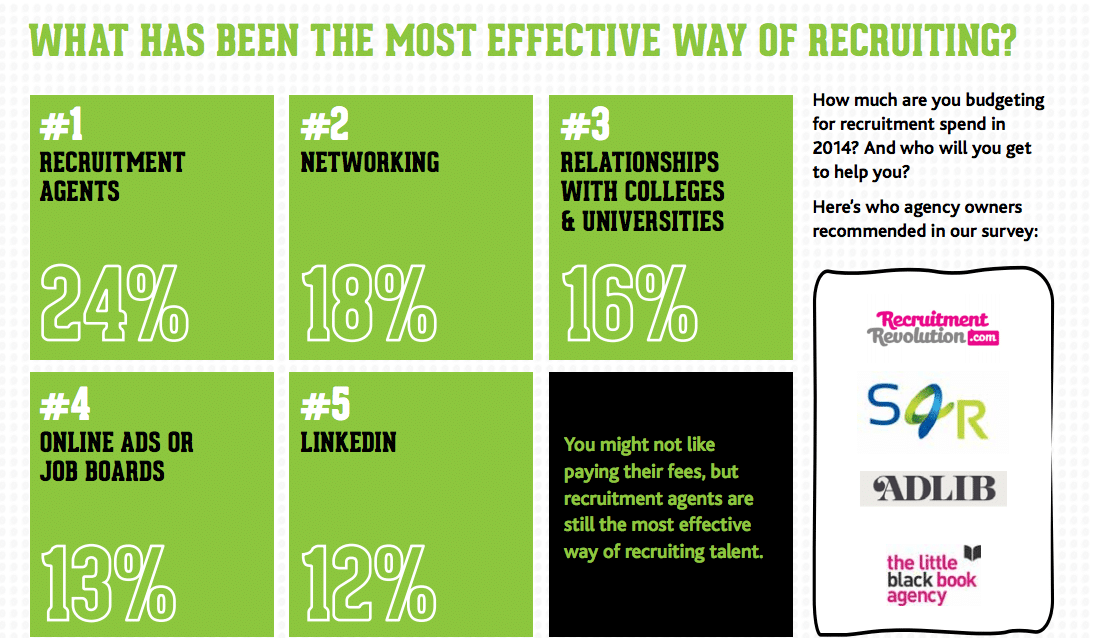 Now we don’t like to brag…well, maybe just a little. The Wow Company recently conducted a national survey of the Creative Industry and guess who was featured as one of the most recommended recruitment agencies!

The Survey
The survey was directed at creative agencies, covering their growth, successes, ways they developed their business, challenges and recruitment strategies. When respondents were asked about the most effective recruitment methods, recruiting via an agency came out top for nearly a quarter of participants.

Other results to come from the survey:

– When asked what thing agencies did in 2013 that made the biggest positive impact to their business, recruiting some good people and moving offices came up top
– Twenty nine percent expect to grow between 26% -50% in 2014
– Fifty two percent are planning to grow by increasing their market spend
– The top three business challenges being faced in 2014 are; budgets that are too small (46%), being squeezed on price (41%) and lack of sales pipeline (38%)
– Other than word of mouth networking, LinkedIn and Twitter are what agencies are using to pick up new clients
– Thirty four percent recruit via recruitment agents, 54% recruit via an ad on their website
– Seventy four percent of purchased software in 2014 will be cloud based and 24% of creative agencies now run all their software on the cloud
– Xero is the most popular accounting software
– Streamtime is the most recommended project management system

There we have it – do you have any comments on the above? Let us know on Twitter by tweeting @RecRev.